January 1, 2020, I do not think I had yet heard of the “new coronavirus” or Covid19. We were visiting my mother-in-law and enjoying a typical Japanese new year. Visiting with my husband’s family and friends in his hometown, with no notion that this year – 2020 – would be historic, and infamous, in turn.

By mid-February, the world had heard of the coronavirus ravaging Wuhan, China and many countries were trying to brace for what was ahead, but not knowing exactly how to prepare. In March, schools in Japan are asked to close, even though the outbreaks of the virus in Japan were not in schools. Soon other countries were also closing schools. And so our children have been out of the classroom from March until August.

Many of us in Japan were unable to travel due to travel bans in place to keep people safe. Adventures of various types were had and we all, slowly began to adapt to the “new normal.” And so the stage is set for our new school year at Yokohama Christian School.

In this time, in this moment, when there is so much going on in the world – a pandemic, a call for racial equality and social justice, big elections, and more… when talking to staff and teachers we wanted to center our school theme this year at YCS on care. Care for our students, care for our friends, care for our families, but also care for people who aren’t like us, care for people who don’t speak the same language as we do, care for those who have less than we do. In other words, we want to focus on care for our neighbors.

The parable of the Good Samaritan is familiar to many people who were raised in countries that have a Judeo-Christian foundation. Someone who is a “good Samaritan” is a person who helps those in need in an idiomatic sense. Let’s see what the parable itself says about neighborliness.

The parable starts with a man asking Jesus – “And who is my neighbor?” to which, Jesus answers this teachable moment with a story to illustrate his point. After two leaders of the temple, pass a man badly beaten on the road, a Samaritan man stops and sees to the man’s wounds. He hoists him onto his own donkey and takes the injured man to an inn, cares for him, and gives the innkeeper money to pay for all of the man’s (a stranger!) needs. He will even pay more if the costs exceed what he leaves with the innkeeper! At the end of the telling of this somewhat dramatic story, Jesus turns to the original questioner and says “Which of these three, do you think, was a neighbor to the man who fell into the hands of the robbers?” His answer? “The one who showed him mercy.” So Jesus, replies – “Go and do likewise.”

For this year at YCS, our focus – staff, teachers, and students – will be on the exploration of the question “Who is your neighbor?” Exploration is only the beginning, the next step will be fulfilling the calling to “go and do likewise.” As many of our traditional avenues of service may be reduced because of the current pandemic, we will be creative and intentional with our actions and projects. We invite parents and friends of the school to help us brainstorm and find projects that we can begin to work on throughout this year. 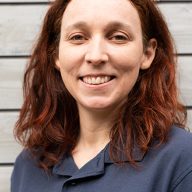 School Head
Ms. Alisha is the Head of School and is originally from Alaska. She holds degrees in international relations and education. She has three children who have all been educated at Yokohama Christian School. In her spare time, she enjoys exercise, reading, and getting together with friends.