Every year Christmas is celebrated around the world as either a commercial or a religious holiday. People are kind and smiling.  For us Christians, it is about the birth of our Savior where the root word of Christmas came. Others think it’s about Santa Clause, presents, food, bonfire, and many more. Every culture that celebrates it has its unique way of welcoming and celebrating the event.

In Southeast Asia, the Philippines uniquely celebrates Christmas. The Philippines is an archipelagic country colonized by the Spaniards, Americans, and the Japanese. The colonizers have influenced the practices and traditions of the Filipino people. We adopted many of the practices and came up with our version of it. The biggest and the longest celebration of Christmas around the world is Philippines. It starts in September or what they call the “ber” months until the 4rth week of January. Christmas songs are played on-air and lighted lanterns on the street.

In December, children start to go around houses to sing Christmas carols in exchange for goods or money. The Roman Catholic church will hold nine days mass “Simbang gabi”. Other churches will hold their own Christmas themed activities and concerts in their localities. It is a custom to have a big celebration on the night of December 24th with a big feast called “Noche Buena”. On the table you will see variety of food such us lechon baboy (roasted pig), manok (roasted chicken), hamon (ham), cheese, cakes, sweets, and others. Exchanging cards are not a big practice in the Philippines but more of a gift exchange. The whole night is filled with joy, laughter, singing, dancing, and eating as everyone greets “Merry Christmas”.  Since the Philippines is the only Christian nation in Asia, the practice of Christmas has become more of a tradition rather than faith-based practice.

If you’ve never been to the Philippines to witness what I mentioned above, try to look around your neighborhood. If you see a house well decorated with Christmas ornaments, lights, and especially star lanterns, there is a big chance that a Filipino live in that house. 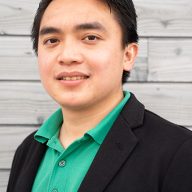 Upper Elementary (3rd-5th Grade) Homeroom Teacher & Music Teacher Mr. Raffin is from the Philippines. He holds a degree in education and currently finishing his masters in cultural education with special education units. He teaches the upper elementary class. He loves to sing and lead worship. He also plays the drums and teaches ukulele and guitar in his spare time.